The Heart Is The Heart Of The Matter. How’s Yours? 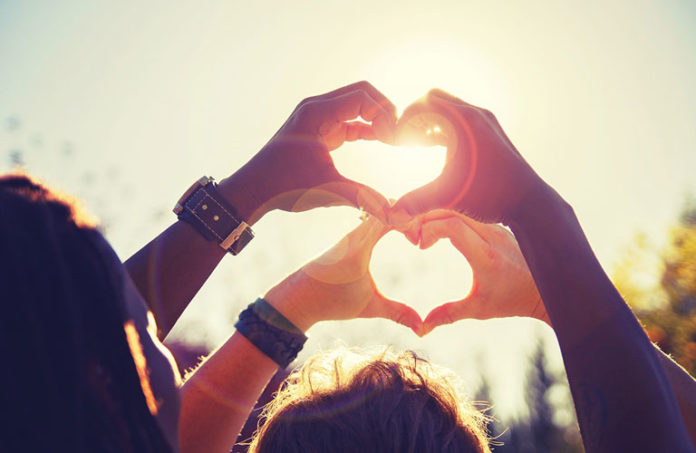 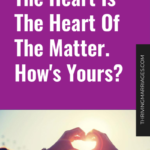 Whenever a marriage self-destructs, the heart is the heart of the matter.

In Proverbs 4:23, wise King Solomon offers a vivid picture of the importance of your heart to the state of your whole being. He calls the heart “the wellspring of life” (niv). What is a wellspring? It is the fountainhead or source of a spring, stream, or river. More broadly, a wellspring refers to a seemingly endless supply of something. When Solomon identified the heart as the wellspring of life, he meant that our very selves bubble up continuously from this central, inner source.

Think about an artesian well for a moment. If the source of the well—the wellspring—is good, you will get good, life-giving drinking water. But if something is wrong at the source, if the wellspring is contaminated by poison or parasites, the bad water that flows from that source has the power to kill.

The instruction to “guard your heart” means to purposely place a protective shield around the center of your life. The word guard suggests exercising great care over or posting a watch. When you guard your hearts, you are guarding all that is truly valuable in life. And the love that identifies and stands against real-life dangers to a marriage is guarding love.

When you practice this fourth secret, you protect your hearts from both internal and external threats. When guarding love is in operation, you and your spouse will enjoy a heightened sense of safety and security in your relationship. And without guarding love, your love will not last.

Safe within the Castle Walls

The castle was built to protect all who lived inside it. Invaders knew they could attack the castle in one of two ways. In a frontal assault, the attackers marched up in plain sight and started hammering away with catapults, battering rams, flaming arrows, and invaders scrambling up long ladders. This was an attempt to break into the castle by brute force.

A second approach was a sneak attack. A few attackers would try to slip into the castle undetected—by night over the wall, through an underground passageway, or by other means. Once inside, they could disarm the guards and throw open the castle gates for the army outside and the castle would fall from within.

We can see a clear parallel between ancient castles and the defense of our marriages and families. If we are going to fight the battle, we must understand both the nature of the assault and the weapons of defense at our disposal.

Career pressures. God created all of us to be involved in meaningful work, but when a man allows the world’s formula for success to capture his heart, he is playing with dynamite! The pressure to make a man’s work his life can be a serious threat to his marriage relationship.

Worldly distractions. In a man’s most inspired moments, he may set godly goals for growth in Christ, family enrichment, and job success—usually in that order of priority. But the daily grind and hourly interruptions sometimes blur or bury those goals. Distractions may come in the form of pleasure (recreation, entertainment, etc.), power or position (influence at work, at church, in the community, etc.), or paychecks.

Relationship pressures. Some days a man feels that everybody wants a piece of him, and most of the time he wants to comply in a loving, helpful, godly way. The boss, the neighbor, the Sunday School superintendent, his friends. If a husband is trying to please everybody who needs something from him, his marriage and family will suffer.

Sexual temptation. Here’s an obvious one—and it’s a deadly peril. Barb and I can’t even count the marriages we know about that have been shattered by sexual sin —an emotional affair, a physical affair, addiction to pornography. These flaming arrows fly at men from every direction in our culture. A husband cannot let his guard down for a moment.

In addition to threats launched at us from outside, we can also fall prey to internal threats.

The search for significance. What man doesn’t want to make his mark on the world? Properly directed, a husband works to use the gifts God has given him to become part of God’s great plan for the world. His greatest significance is bringing glory to God. But some men can become so sold out to “I am what I do” that they lose all sense of balance. They claw their way up the corporate ladder and develop their careers while sacrificing their families.

Passivity. One of the top laments we hear from wives is that their husbands are passive. A passive man backs off and does little or nothing to nurture the relationship. A passive man stops running hard and fast after God’s best for his family.

Control. Most men like to be in charge, but God never intended for a husband to control his family. Rather he is called to love and serve his family as Christ loves and serves the church. Control is going all-out to get things your way, and it can be the result of fear, insecurity, aggression, or low self-esteem. A controlling husband and father can be poison to a family relationship.

Competition. Most men love to compete. Competition in balance is called a sport; competition out of balance is a war. If a man’s priorities are not firmly in place, the drive to compete can unravel what matters most to him: his family.

A woman’s heart is just as vulnerable to attack as a man’s. Yet these attacks are often different. Here are some of the more obvious, external temptations:

Relationships with other men. Wives must protect themselves when interacting with men other than their husbands. A woman may be attracted by a man’s physical attributes, but she is many times more likely to be lured by an emotional connection. Wives must not allow themselves to be emotionally dependent on other men—or vice versa.

Preoccupation with children. When a wife continually puts the children before her husband, the marriage becomes unbalanced. She can’t ignore the runny noses or the homework that’s due tomorrow morning, but a wife must do whatever it takes to manage her children’s needs in a way that doesn’t ignore her husband.

Failing to meet personal needs. Women often spend their time meeting the needs of everyone around them and then fail to refill their own tanks. That leaves wives vulnerable to many threats that can disconnect them from their husbands, including bitterness and anger. If these threats are not addressed, they lead women to be vulnerable.

Wives, you might not get drawn into an emotional or physical affair. But your hearts may be drawn away by something seemingly as innocent as some of these internal threats:

Worry. It’s natural to be concerned for the people you care about. But all-consuming worry pulls you away from trust in God. Worry is a distrust of God’s resources and an attempt to live by your own devices.

Critical attitude. Most women hold an ideal for their marriage and family life. When a wife feels that her husband doesn’t support these needs and wishes, she may develop a critical attitude, especially toward him and her children. A critical spirit is a real love killer.

Comparison. Some women tend to compare themselves to others on everything from the intelligence of their children to the address and square footage of their homes. This unhealthy habit can lead to dissatisfaction with themselves and their relationships—especially the people they may hold responsible for any shortcomings: their husbands.

Control. It is the nature of many women to take charge, to coordinate their families, and to make things happen. But God’s plan for marriage involves family leadership from the husband. Women who assert unreasonable control may cause great discomfort to their husbands. It is a sure way to push them even farther away than they may already be.

You may find it hard to believe that your heart could ever drift from devotion to your husband or wife or become poisoned by other loves. Relational ruin happens to other people, not you. Don’t be lulled into a false sense of security. You are wise to heed the caution of 1 Corinthians 10:12: “If you think you are standing strong, be careful, for you, too, may fall into the same sin.” Your success at developing guarding love depends on recognizing that your hearts and your marriage are vulnerable to devastating attack.

*For more about how to unlock the biblical secrets to a marriage that stays vibrant and strong for a lifetime check out our book 6 Secrets to a Lasting Love in our online bookstore!