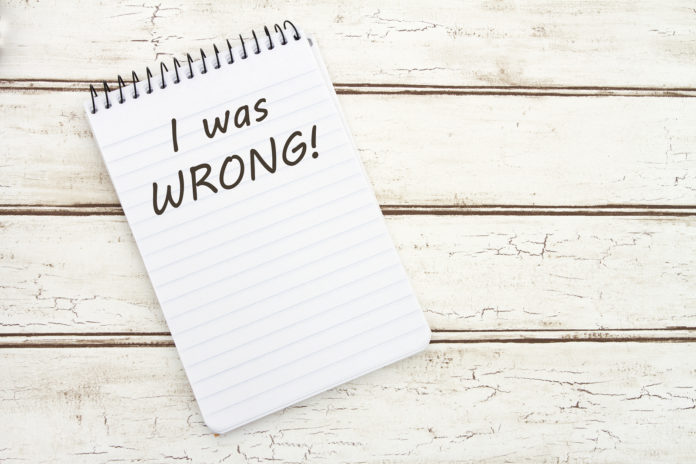 If you are old enough to recall the sitcom Happy Days, you’ll remember “The Fonz.” Henry Winkler played the character of Arthur Fonzarelli, the coolest guy in town. The Fonz in his leather jacket and perfect hair could get all the ladies with the snap of his fingers. Despite his bad-boy persona, the Fonz was a warm-hearted guy who could surprise you with sage advice. But the Fonz had one fatal flaw: he could never admit that he was wrong. In those rare cases when he erred, Fonz would humorously try to say, “I was wwwrrrr . . . ” or “I’m sssoorr . . .” but couldn’t finish his statement.

Do you know anyone like that? At work, in marriage, and in friendship, they simply never own up to their mistakes. They may even be overly kind or generous for a period of time as an unspoken way of making up for faults, but the words, “I was wrong” will never cross their lips.

It never feels good to apologize or own up to our failings. Most of us can get the words “I’m sorry” out of our mouths, but we quickly follow with an explanation of why we were justified in our actions. Or we follow an apology with making the case that the other person has even more to apologize for.

Admitting your faults isn’t the same as giving into them. We all know people who excuse their destructive behavior by saying, “That’s just the way I am. Deal with it!” This attitude actually discounts the harm their behavior causes and also neglects God’s call for us to pursue the perfection of Jesus through the power of the Holy Spirit. Instead, we are all called to embrace a humble spirit that seeks true reconciliation when we’ve done something wrong or hurtful.

Getting Past Black and White Thinking

Although it’s illogical, admitting a mistake or fault can feel like accepting the blame for everything that’s wrong with your marriage, your children, or your workplace. A woman often believes that admitting her faults as a wife would mean letting her husband completely off the hook for his offenses. No wonder we don’t want to say, “I’m sorry” if it ends in conclusions like these! But why do logical, intelligent people fall into this trap?

I don’t mean this to sound patronizing, but the core of the issue is that we haven’t moved past the black and white reasoning of pre-adolescence. Think about the cartoon and movie characters represented in children’s shows. There are good guys and bad guys, villains and superheroes, cops and robbers. Pre-adolescent minds have great difficulty holding together the concept that people aren’t all good or all bad. A small child being disciplined feels incredible shame for his misbehavior. He goes beyond, “I did something bad” and believes “I am something bad.” For a while, he may fear that he has lost his parents’ love. “I was wrong” becomes “I am wrong.”

As we grow, we develop the intellectual capacity to accept that people are never all good or all bad. Your best friend is capable of doing something cruel, and a selfish person is capable of an act of kindness. While we have the intellectual ability to understand this, sometimes we lack the emotional maturity to apply it to ourselves. Even as full-grown adults, we can fall into black and white thinking. “I was wrong” all of a sudden gets blown into “I must be a terrible employee. I can’t do anything right!”

Read Next on Thriving Marriages  When You Should Leave Your Spouse

Like every other person on the planet, you are limited and sinful. So stop pretending that you’re not! I remember several years ago getting showered at the gym when I had my period. I was coyly trying to hide my tampon in the bundle of clothes I carried to the shower. A kind lady stopped me and pointed out that I had dropped the tampon. I was very embarrassed, but why? The irony of it hit me. I was in the women’s locker room surrounded by other women who have a period every month. Why was I ashamed to admit that I was normal?

We do the same thing, trying to hide the obvious fact that we are human, sinful, and fallen. Why am I embarrassed when I can’t remember someone’s name? Why do I deny the fact that I get grumpy and can be difficult to live with? Why am I offended when someone points out the negative qualities I know to be true about myself?

Maturity means accepting your faults and limitations but rejoicing in God’s grace that he loves you and uses you in spite of yourself. Learning to be honest with your faults and failures can impact your life in five significant ways.

1. You can only change what you are responsible for.

When you blame others for your circumstances, you are a victim of their choices. When you step up and own your contribution, you can do something to improve things. If the problems in your marriage are 100 percent your husband’s fault, you’re helpless. But if you own your piece of the dysfunction, guess what. You have the power to make an impactful change in your marriage.

2. God gets the glory for every success.

When you are open about your failings and limitations, others around you can give glory to God when good things happen. For example, the more aware I am of my failings as a mom, the more grateful I am for the Lord’s work in my children’s lives. When my children thrive, I know it’s not because I’m such a great mom; it’s because He is such a gracious God.

We often avoid asking for forgiveness because we think it will give the other person a free pass for their part in the problem. Ironically, when we are truly honest and repentant, we allow room for the Holy Spirit to convict the other person. Defensiveness is contagious and so is confession. Like a game of tug-of-war, when you let go of the battle of blame, the other person is stuck holding the rope.

4. You don’t have to pretend anymore.

How much emotional energy do you spend trying to convince everyone (including yourself) that you have it all together? Just get it out there . . . “I’m an anxious person.” “I have a short temper.” “I’m forgetful.” “I’m a sinful, fallen human being, but I’m asking God to change me.” Saying “I was wrong” is actually freeing!

David wrote, “Let the godly strike me! It will be a kindness! If they correct me, it is soothing medicine” (Psalm 141:5). Taking responsibility for your mistakes is not a sign of weakness but an indication of great inner-personal strength. A major benchmark of emotional and relational maturity is the ability to admit fault and even ask for constructive criticism.

I’m convinced that our unwillingness to acknowledge our faults is a serious illness within the body of Christ. Whether it is disagreements between denominations or within a marriage, saying “I was wrong’ creates a humble heart allows the Holy Spirit to work in and through us. Our stubbornness and defensiveness grieves the Holy Spirit and prevents his work from creating deep love and unity among God’s children.