The Destructive Danger of a Negative Spouse 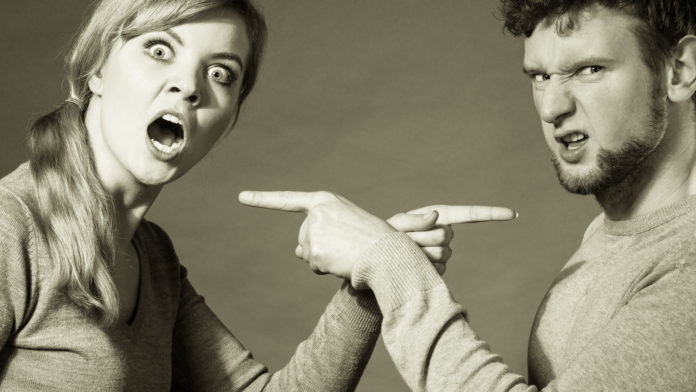 A negative spouse reeks destruction on marriages. Here’s how…

Frederick Buechner is a brilliant writer who can jump between fiction and nonfiction like a champion American Ninja Warrior skips over a water obstacle. In his novel Godric (a finalist for the Pulitzer Prize), Buechner brilliantly makes us feel sorry for Richard the baker, who is married to a noxious woman:

“There was Richard the baker and Peg his wife. Peg was a sparrow with a peck so sharp there was no proof against it. All was amiss, to hear her chirp, and she was ever chirping. If the sun was warm, she said it stewed her brains. If a cool breeze blew, she squawked of chilblains. The Holy Ghost himself she would have found too holy had he come and perched by her, I think, and Richard was her favorite prey. Whatever roughness of the road or turn of weather vexed her, Richard was the one she blamed…

“It’s true Richard laughed too much, but Peg had pecked and pecked till he was silly in the head. He laughed the way geese gaggle, less from mirth than brainless barnyard rote. Wedded to Peg myself, I would have wept. I think his laughter was but Richard’s way of tears.”

We’ve all seen a negative spouse like Peg. They want people to feel sorry for them so they make sure everyone knows how awful their spouse is. What they don’t realize is that people usually recognize what’s going on. They don’t feel sorry for Peg; they feel sorry for Richard.

This isn’t a gender thing, by any means. Men can also be a negative spouse. We’ll call these men “Regs.” One wife told me that the biggest deterrent from her having enthusiastic sex with her husband was his constant criticism. In her husband’s opinion, she didn’t cook correctly; she didn’t clean correctly; she didn’t drive the right way, raise the kids with enough discernment or even chew her food in the correct manner.

Living in an avalanche of criticism, she knew she also must be (at least in her husband’s perception) missing the mark when it came to sex. While she eagerly desired fantastic sex, and even thought she had an above average sex drive for a woman, she couldn’t bear to do one more thing with a man who was constantly criticizing her. Her exhaustion with being criticized trumped her desire for great sex. Which meant her husband constantly criticized her for not wanting more frequent sex.

In my book Cherish I stress how it’s never our job to judge our spouse. Our job is to cherish our spouse and to encourage our spouse. Constant disappointment, whether it’s expressed through verbal jabs or a nonverbal rolling of the eyes, or worse, expressed contempt in front of others (“Let me tell you what I have to live with…”), rarely achieves the desired aim. Far more likely than getting people to feel sorry for you, it’s probably going to make them feel sorry for your spouse. It’s a losing strategy, but some negative spouses keep trying it for years.

Everyone knows a spouse’s “job description” is to honor, love, respect and cherish. It’s what we promised to do and what God calls us to do. Even more, our job as Christians is to encourage: “Encourage one another and build each other up” (1 Thessalonians 5:11).

Learning how to be encouraging in the face of a spouse’s weakness not only inspires others, but it slowly builds up our spouse so there’s eventually less to complain about. I especially admire those spouses who find a way to honor their loved one when the flaws are so obvious to everyone around them. When a man finds a way to cherish a wife few could cherish, or a woman finds a way to cherish a husband most would call “average,” at best, I see supernatural saints at work. And usually (not always, but many times), a cherished spouse becomes a more excellent spouse. Never perfect, but better than they would have been otherwise. Cherishing each other isn’t just a promise; it’s an effective strategy based on what God did with Jerusalem (see chapter 6 of Cherish).

Don’t be a Peg or a Reg. If your spouse hears more negative criticism from you than positive encouragement, you’re at least in the ballpark of making it into Frederick Buechner’s next novel. In all of Scripture you’ll never find a single passage that suggests constant criticism is God’s preferred method for us to get others to measure up. God’s way is the encouraging way:  “Encourage one another and build each other up” (1 Thessalonians 5:11).