Sex Life Getting Stale? 10 New Things to Try in Bed 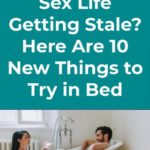 Here’s an email I recently received of someone wanting new things to try in bed with their spouse:

We’ve been married for 8 years. I am an introvert and do not like being in the center of attention. This also reflects in my sex life and has from the very beginning. I know that my husband wishes I were more adventurous and open and I wish that too!! How can I become more comfortable with spicing things up in the bedroom (wearing lingerie, being more vocal during sex, even doing a sexy dance, etc.). I want to be completely free, but freeze and feel self-conscious at the idea of actually doing one of those things. Do you have any suggestions for being more adventurous?

You’ve come to the right place! And so today, for top 10 Tuesday, I thought I’d share 10 new things to try in bed—to be more adventurous in your sex life.

And these 10 new things to try in bed all address the same problem: We’re too self-conscious, and we’re nervous about sex. So the key to new things to try in bed is to first make us more comfortable, and second set up scenarios where we don’t have to feel like we’re the ones who have to come up with something to do. It’s on the agenda anyway, so we’re not instigating it. And for a lot of women that’s a lot less scary! So here we go: we’ll start with little things first to make you more relaxed, and then we’ll get steamier as we go along!

1. New Things to Try in Bed: Turn The Heat Up

It’s such a little thing, but most women are a lot more comfortable when they’re not cold. If you want your husband to see you in lingerie, don’t be shivering! Just put a space heater near your bed. That way you don’t have to turn up the heat in the whole house.

2. New Things to Try in Bed: Turn the Lights Low–or Use Candles

If you’re nervous about him watching you, or about what you look like, then turn the lights low. You can still do a little “lingerie fashion show” without the lights blaring.

A little light is fun–men are visual, after all. But if you’re nervous, setting softer light can go a long way to making you feel more at ease–and help you feel more adventurous.

3. New Things to Try in Bed: Start with a Bath–or a Massage

Instead of just jumping in to sex, start with something that relaxes you and helps you feel intimate. After all, why are we scared to be adventurous in bed? Because it feels like all we care about is sex. Doing something that connects you more intimately first shows you that it’s about the relationship. So cuddle in a warm bath. Take a hot shower. Have him give you a massage (while you’re both naked!) Get relaxed and let yourself FEEL that he accepts you.

4. New Things to Try in Bed: Add Something Extra That You Can Prepare Earlier

Sometimes we need to act when the thought strikes–instead of hoping that your courage will be there at night, when he’s watching you or you’re together. So if you’re feeling a little frisky or a little more adventurous, and you’re hoping for some fun tonight, head to your bedroom NOW, before you talk yourself out of it, and draw a little lipstick heart somewhere interesting for him to find later–like on your breast or inner thigh. Put on some risque lingerie for him to discover when you undress tonight. Dab bits of different perfume on different areas of your body that he’ll have to find later. Or come up with some other ideas.

But the key: do it when the thought strikes. Don’t assume you’ll follow through tonight!

5. New Things to Try in Bed: Create His Nights and Her Nights

Maybe there’s something that he’d really like to try that you’re not totally keen on. And you’re worried that if you do it he’ll want it all the time! Or you feel embarrassed to suggest that maybe you should try that tonight.

Here’s the benefit: If you’re feeling shy or embarrassed to try something new, psychologically you’re “off the hook” because it’s not YOU who is initiating this; it’s him. And you know that you’ll get your own preferences later. Then on the nights between the Saturdays you can just do what you would normally do.

Often we women actually want to do some of the things he’d want on “his” nights, but we don’t want to feel like we’d have to be doing them all the time. Or else we’re embarrassed to say, “that actually interests me too”. Here’s a way to just do it!

If you find it difficult to voice what you would want on your day, write your “his” and “her” ideas on pieces of paper and then put them in a jar–you can use different colours for each of you, or just use two jars. Then on his nights and her nights you can pick out a piece of paper and do what it says. Again, this psychologically feels easier because you don’t have to voice a preference, but you do get your needs met.

6. New Things to Try in Bed: Have Him Stay Stock Still–and Don’t Let Him Talk

Have him lie on his back and tell him that he can’t move for ten minutes–and he’s absolutely not allowed to talk (he can moan if he wants to, but no words). The benefit? You can explore his body without any feedback from him (well, except that you’ll likely see the response you’re getting rather obviously). Don’t even look at his face if you find it too embarrassing. This lets you actually feel his body or do whatever you want to his body and just get to know it better. If you need to, blindfold him so that he can’t see what you’re doing, and you feel more free to explore.

Intercourse is actually not the most intimate thing. It’s far more intimate to be intentional about touching and teasing and taking time to explore. That shows real interest on your part about learning about him–and that’s why it can be embarrassing. If any of us grew up thinking that showing interest in sex was shameful, then to show interest in learning something sexually can be difficult.

But what if HE’S the one who balks at this, and doesn’t want to try anything racy? Here’s a post when he’s the one who needs to be more adventurous in bed.