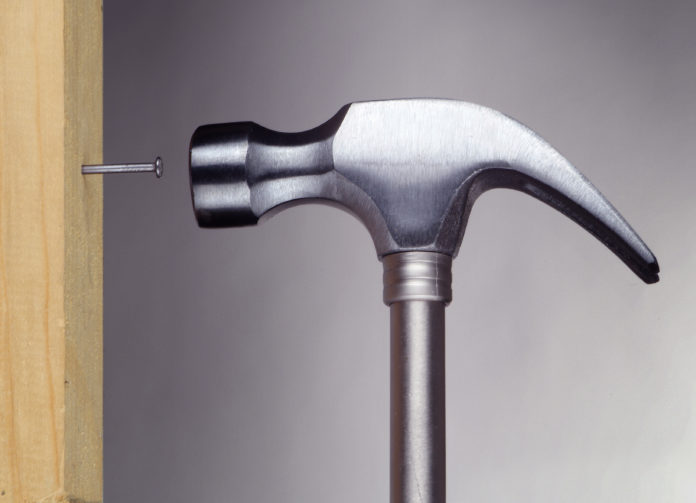 It’s Not About the Nail was a popular marriage video that made the rounds (we’ve done a post on it!. This post is the other side of the argument that video is making. Sometimes, it IS about the nail. But even if you don’t know what I’m talking about, this is worth your time to read. Enjoy!

It’s Not About the Nail revealed that a lot of marriage teaching is quite gender based.

One of the big things that we often hear is that, when you’re discussing a problem, men want to fix things, whereas women just want to be heard. So what a guy is supposed to do is stop trying to fix anything and sit back and just be compassionate.

There is value to that–it’s important to be a safe place for your spouse to vent and share feelings. When we try to fix something, it’s almost like we invalidate their feelings (“If you had just done things my way,  you wouldn’t be feeling this right now!”). But I don’t think it’s a gender thing. In our marriage, I tend to be the one to run in and try to fix things, and I have to learn to step back and listen. In fact, I would venture to say that many women are in that position.

Guys, you see, don’t tend to get as many chances to vent their feelings or express themselves as women do, since studies show that women tend to talk about their feelings with other women far more than men do with other men. And because guys, in general, are less comfortable naming emotions, they often benefit from being able to talk things through with their wives, just so they understand themselves a little more. When we short circuit that by trying to micromanage, it can be harmful to a marriage.

Nevertheless, sometimes we can take this a little far. Here’s a video that I think is actually quite hilarious, that we show at marriage conferences quite a bit. It’s seriously worth watching–you’ll laugh, and it’s pretty short (scroll down below “My Latest Videos” if that pops up):

The lesson to be taken from that video is, It’s not about the nail. The important thing is to be a sounding board for your spouse, and especially for your wife.

However, when we show that video, I often make a different point, which is just as important:

Sometimes this whole “you should listen to me and not try to fix anything” can be taken overboard. It can become an excuse for not trying to fix the problem. You get so comfortable talking about it, and you don’t want to take the difficult steps that may be necessary to stop the issue from popping back up again.

One of the things I’m grateful for in my marriage is that Keith has a different perspective than I do.

He doesn’t see the world in the same way. Because of that, he often has insights into the things that are bugging me that I don’t have. And when I have something that’s driving me nuts, he can often suggest one or two ways of handling it that I hadn’t seen before. Because sometimes it’s about the nail.

In fact, I’ve recently asked him, “when you see me not doing the new habits that I’m trying to learn, and spiraling into old bad habits, I want you to call me on it and help me get back to what I really want to be doing.” Often I get into these funks because I’m upset about something on the blog or online or in the news, and then all of my plans go out the window. In other words, sometimes it is about the nail. I appreciate it when Keith tells me, “Even if you want to sit and do nothing, we’re going out for a walk and we’re going to do something fun tonight even if you don’t feel like it.” He knows me better than I know myself sometimes, and he knows how to get me out of the funk. He could just sit and listen to me explaining all that is wrong and all that is bugging me, but he knows that if I get a change of scenery, those things won’t matter as much.

That’s not healthy (in fact, it’s emotionally abusive).  We need to honor our spouse’s boundaries and let them make their own choices and have their own emotions.

Yet in a healthy marriage people also call each other to account, and people also do have insight into each other. So next time you’re in a conflict with your spouse, and you feel like he (or she!) is trying to fix things, try stepping back and asking, is this about the nail? Sometimes it certainly isn’t, and your spouse just needs to listen more. But sometimes maybe it is. And maybe you should listen to your spouse instead!

I say this every time we post something from To Love, Honor, and Vacuum but Sheila Wray Gregoire is one of my favorite marriage bloggers around, and today is an example why.