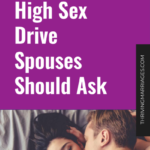 Are you the high sex drive husband, and you’re wondering what to do because your wife rarely wants sex?

We opened the week looking at frequency of sex in marriage. Usually marriages start off with couples having sex relatively frequently (like at least several times a week).

(If yours didn’t, then that really is a sign that something major is going on, and you should see a licensed counselor).

But then, just as frequently, couples see a drop off in frequency. Sometimes it’s not a big deal, but sometimes, even over a period of years, that drop off becomes drastic.

In this post, I’m addressing marriages where the drop off is huge–and sex is happening less than once a week.

Next week we’ll look at high sex drive spouses where sex is actually happening a healthy amount of time (as we looked at on Monday), but today, I want to focus this on high sex drive husbands who are having sex a few times a month or less. (We’ll talk to wives on Friday)

So let’s get started!

An uncomfortable truth: Drastic drop-offs in frequency of sex rarely happen in isolation.

When we surveyed 20,000 women last winter for our upcoming book The Great Sex Rescue, we found that 73% of truly sexless marriages had at least two of these problems:

I’m going to assume that for you the issue is not male sexual dysfunction, since if it were, this isn’t the post that you’d be reading.

Please hear me on this one: I am not saying that this is necessarily your fault. If the majority of marriages do things because of X, you could still be in the minority who look more like Y. And when it comes to sexual pain, you’re not responsible for that (although you are responsible for how you handled it). In many cases when she doesn’t feel pleasure, too, the problem is more that she won’t let herself relax and explore what feels good because of things that she’s believing. You’d love to give her pleasure, but she’s not willing.

(And we’ll be addressing a lot of this in our Orgasm Course launching next month! Make sure you’re signed up to the email list to be notified when it’s available, and so you don’t miss the launch sale!).

That being said, it does very little good to tell you that it’s all your spouse’s fault, and you’re justified in being angry and hurt. That only leaves you stuck, and I want to see you move forward.

Yesterday I addressed what the lower drive spouse can do to help the situation, and today I’d like to ask  you to take an honest look at what has happened in your marriage and sex life, to see if there are steps you can take to bridge the gap.

Questions for High Sex Drive Spouses to Ask Themselves

These may be hard questions to hear, but please, pray now, before you read them, and ask, “God, if any of these relate to me, please soften my heart so I can hear it.”

1. Early in your marriage, did you express frustration, anger, or criticism that your wife wasn’t enjoying sex as much as you were?

For most women, orgasm is a learned behaviour; it isn’t something that automatically happens with intercourse.

If you were critical or angry that your wife didn’t enjoy sex the way that you did, or were frustrated that she couldn’t orgasm or couldn’t get aroused, it’s quite likely that she now equates sex with something she’s not good at. Most women already have body image issues; she likely now feels, “I’m broken.”

Even if you don’t feel that you were angry at her, if you were internally focused on your own disappointment rather than helping her experience great sex, she likely picked up on that.

Or if, when she did have sex and enjoyed it, you’d also complain and criticize that you weren’t doing it more, she would have internalized the message, “nothing I do will ever be enough.” Then sex, which she was enjoying, became something that still made her feel inadequate.

2. High Sex Drive Husbands: Did you take time to ensure that your wife felt pleasure?

When you were just getting used to intercourse, was her pleasure your focus, or was it your own? Did you slow down so that you could figure out what would arouse her, or did  you think that she should be aroused by the same things that arouse you, and so figure that she should “catch up” to you?

If you had sex for months, or even years, without her experiencing pleasure or an orgasm, you may need to apologize and ask for forgiveness.

Maybe you wanted her to feel good, but she had too many hang-ups or she wasn’t comfortable with you trying to touch her. Even then, to go ahead when she’s not enjoying herself is to solidify in her mind, “sex is not for me.”

It’s better to sit down early and talk about how God made sex to feel passionate and amazing for both of you, and go through a challenge like 31 Days to Great Sex, which can help her step-by-step discover how her body works, without it being overwhelming.

3. Have you expressed frustration when she is experiencing physical issues making sex uncomfortable?

Up to 7% of evangelical Christian women experience sexual pain to the point that penetration is impossible, and many others experience vaginismus or other kinds of dyspareunia (sexual pain) where penetration may technically be possible, but is very, very uncomfortable.

If your wife experienced pain, did you insist on trying to have intercourse anyway? Did you talk about how disappointed you were that you couldn’t have sex, to the point that she pushed herself to go through with it because she felt so embarrassed and broken and guilty, or did you show her acceptance and love and reassurance?

After having a baby, women can experience sexual pain, even if sex was easy beforehand. If that was your wife’s story, were you patient as she healed, or did you pressure her to have sex regardless?

Perhaps it’s not sexual pain, but pain overall. If your wife has had heavy periods so that she’s experienced a lot of cramping or very heavy bleeding, did you as the high sex drive spouse express sexual frustration to her, rather than compassion for what she is experiencing? Did you prioritize your own sexual frustration over her physical discomfort? I know that many Christian books talk about men’s sexual discomfort as if it’s very difficult to go more than 72 hours, and women shouldn’t make their husbands wait. But this isn’t God’s view (as we see from Old Testament laws about periods).

When women feel as if their physical experience isn’t important, then sex is no longer a mutual experience. It’s only about being used. That can easily turn a woman off.

4. Was sex, when you had it, depersonalizing?

This doesn’t always mean, though, that they are going about intimacy or sex in the way that will build intimacy. Sometimes we swap intimacy with sex, and we actually debase both.

Maybe you’ve been pressuring your wife to do things that she is not comfortable doing and that don’t feel intimate. And maybe you’ve expressed disappointment that she won’t try things, as if she doesn’t love you because she won’t give these things to you that you want.

If you haven’t been able to say “I love you” or say your spouse’s name during sex, but instead tend to use very coarse language that your spouse doesn’t like, or even “check out” during intercourse so that it’s obvious you’re not really thinking about your wife, then sex may become something very ugly in your relationship. Here’s how one commenter described it: