Infatuation Is Normal, And An Affair is Preventable. 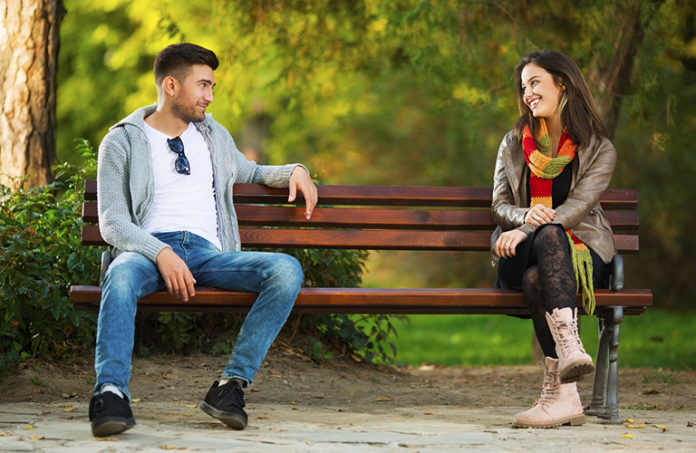 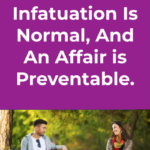 In 1977, Avodah Offit wrote a popular book entitled The Sexual Self that became a favorite among many sex therapists. I’m not endorsing the book (I haven’t actually read it), but she has a quote in it that I wish I would have read before I got married:

“My experience indicates that most people become infatuated or fall in love with others an average of six times in the course of a long marriage.”

Six times sounds like a lot to me, but when I found myself very attracted to someone else rather early in my marriage to Lisa, I was caught completely off-guard. It made me think something was wrong with my marriage, rather than that such feelings are normal and even predictable. Not being fore-warned, I wasn’t fore-armed. It would have been so helpful for me to know thirty years ago not to freak out. Perhaps I would have managed it better than I did.

If you’re committed to cherishing your spouse for life and suddenly find your mind fixated on someone else, there are many wrong responses and several right ones.

The first wrong response to infatuation is to assume something is wrong with your marriage, in the sense that you need a new marriage. For us Christians, trouble in our marriage is more like finding out we have heart disease. In all but the most serious of cases (abuse, unrepentant infidelity) we should seek to repair the heart instead of search for a new one.  If you don’t understand that additional attraction is normal you may think that because, momentarily at least, you seem to have stronger feelings for someone else than you do for your spouse, the marriage must have run its course.  But just like with a physical heart (where you can bring cholesterol down and alleviate high blood pressure before you seek a heart transplant), so in marriage you can treat the underlying weakness before you jettison the relationship.

In a sacred marriage, the marriage isn’t over until God says it’s over. Your feelings for this other person that you’re not married to don’t mean you no longer have a deep commitment to (or even love for) your spouse; your emotions have just been caught off-guard. That’s all it is. That’s what emotions do. In other words, don’t make the infatuation more than it is. Arm yourself with this understanding: if you get a divorce and marry this new person and stay married for a long time, you’ll eventually become attracted to or infatuated with someone else, maybe even your current spouse! (Don’t laugh. I’ve seen it happen with other marriages.) Infatuations inside and outside of marriage are momentary storms. It’s foolish to cancel your summer vacation because of a winter storm warning. Just wait until it passes.

The second wrong response to infatuation is to be caught by surprise. Imagine a heavyweight boxer working out for months, strategizing for his next fight, then freaking out when he takes an uppercut that makes him woozy. A good trainer will tell him in advance to expect and then overcome that hit—clinch your opponent, stall for time, get your full consciousness back as soon as possible. The champion boxer will have a plan for when he gets hit.

In marriage, an infatuation or attraction for someone else is like that uppercut. It’s part of the game—much more common, apparently, than I realized, if Offit is to be believed. We’ve got to learn how to respond rather than let the uppercut take us out. When it happens, figure out how to recover instead of just falling down (we’ll address that in a moment when we talk about right responses).

The third wrong response is to feed the attraction or the infatuation. The famous three elements of building a relationship—time, talk, and touch—must be guarded against, religiously. Suffocate the affection. Don’t feed it. Deprive it of everything that normally builds a relationship. If you slip off alone and have a meal together “to talk things out,” you’re creating a romantic tsunami that may become more powerful than you can handle. Sneaking around creates an intimacy that feeds the infatuation and feelings. “You and me against the world” becomes a romantic notion instead of the nightmare scenario that it is. In such cases, it’s not just “you and me against the world,” it’s “you and me against God,” and that’s a dangerous place to be.

So, the three wrong responses are, don’t assume it’s the end of your marriage; don’t be caught by surprise; and don’t feed it.

Lisa eventually found out about the first time I became infatuated with someone else because it became a big mess, much to my own discredit and fault. The second time, Lisa never knew because I was prepared and knew how to handle it. I went to my godly, wise friends. I was part of a great accountability group we called “the Pacific Rim” because it consisted of a Japanese man, a Korean man, and a Chinese man. I was the token white guy. I think every young husband should have friends that are following the Lord like these guys.

Right away I let them know what was going on. It was at a conference, and absent “artificial contact” I wouldn’t see this person again for about another year. We jokingly called her the “elevator girl” because that’s where I met her. It would have been possible to track her down if I had a “work” question, but my friends and I had agreed, “We’re not ever going to do that, right?” And they’d check up every now and then to make sure nothing was going on. I’m such a terrible liar—I’d lose everything I own if I tried to play poker—so there was no chance of fooling these guys.

I was surprised at how quickly and how easily this second attraction was managed. Without it being fed, it died a rather predictable and easy death. There’s been nothing else remotely close to it in the past couple of decades, so I don’t see how I can get to Offit’s six—and I hope I never do.

No doubt, focusing so intently on cherishing my spouse certainly keeps me distracted from possibly cherishing someone else.

Here’s what made the difference: I saw the infatuation as a threat instead of a fantasy or escape. I knew it had to be guarded against instead of fed. I knew I needed to ask for help and reinforcements. And I knew, from past experience, that it could pass and it needn’t threaten my marriage. It didn’t even have to frustrate my marriage. It never reached the point where I or the guys thought I should even talk to Lisa about it, because it was never a big deal.

For her part, Lisa has experienced this just once and, like me, was caught totally off guard. “No one ever warned me that this happens,” she told me years later. “No one talks about it.” I tried not to take it personally that he had a ponytail (you can take the girl out of Seattle, but you can’t always take Seattle out of the girl).

Add both of us up, and our marriage has faced this three times. The lesson learned? Don’t take it too seriously when an outside attraction or even infatuation happens to you, and don’t take it too personally when it happens to your spouse. We rarely choose these things, and, at least according to therapists, they’re bound to happen. In a sacred marriage, there’s so much more keeping us together than a momentary emotional storm. Remind yourself of those things: the vows you made to your Creator, to your spouse, before your church, and friends and family. The reality that you are married to your heavenly Father-in-Law’s daughter or son. Your kids’ welfare. Your witness. The spiritual benefit of working through difficulties in marriage instead of running from them. The fact that having to kill your marriage and betray your life partner should make you miserable and ashamed rather than happy.

Like a champion boxer who anticipates his opponent’s uppercuts, recognize that monogamy will also involve taking a few hits. One hard punch doesn’t have to knock you out and shouldn’t knock you out. Practice wise self-defense and you can stay in the ring and finish the match.

Knowing that outside infatuation remains a possibility can actually serve marriages. Proust suggests that a little jealousy rescues relationships that have been “ruined by habit.” It’s natural to begin taking our spouse for granted. Occasionally doubling down on winning our spouse’s hearts back is a good practice if it’s not done out of desperation and fear. Rather than remembering to do this only when we suspect an outside attraction has already been built, we can anticipate it. Since I now know that this happens, I shouldn’t get too laissez faire in my marriage. Just because I take a break from wooing my wife doesn’t mean her emotions will take a break from being wooed.

Positively working to cherish your spouse (by taking the Cherish Challenge!) can keep your mind and heart so activated and attuned to your own marriage that outside emotional attractions are likely to become far less common. At least, that’s what has happened with me.