HomeMoneyHow We Paid Off $200k In Debt
Money 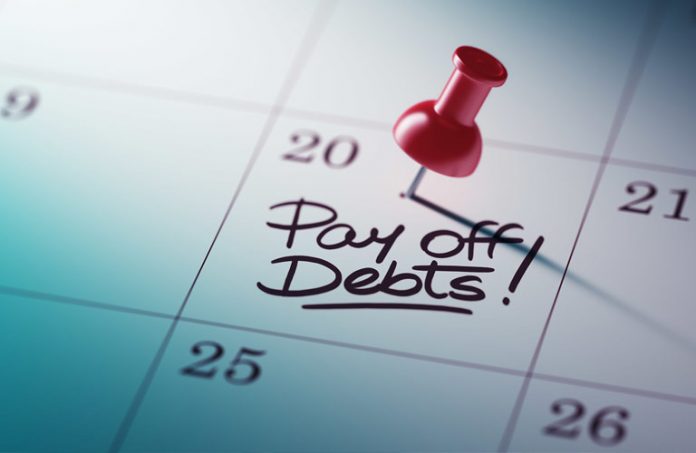 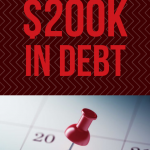 WE HATE TALKING ABOUT MONEY.

Budgets, spreadsheets, credit limits, financial goals, retirement funds… we’d rather talk about anything than have to face our money head on. But something terrible happened to us back in 2008, and we were forced to deal with our financial issues. This is our miraculous story about how we paid off over $200,000 of debt we had accrued, all while the economy was failing and we were living on one paycheck.

It all starts with us meeting in college, where we both had taken out A LOT of student loans so that we could have a good education. And since we never took a finance class, or had our parents teach us how to save, spend, or give, we had NO CLUE how to manage our money. So we got married already in debt, all while feeling very entitled to buy what we wanted, putting all purchases on credit cards. We financed everything, leased our cars, made minimum payments on credit cards, and spent more than what we made, because we were told that debt is not only normal, but also helps build your credit score.

One night, I couldn’t sleep. I laid awake stressed because I knew rent was coming and we didn’t have the money to pay for it. I woke Casey and up at 2 in the morning and started freaking out. I had told him my concerns and he admitted that he too often would worry about our money but wasn’t sure where to begin. We decided to pay off our debt and come up with a plan, went back to bed and then…. one week later, Casey got laid off. Our daughter was only 6 months old at the time and I was a stay-at-home mom, so now we had NO money. Talk about stress. Looking back, it might have been the best thing that happened to us because it forced us to face the massive money problem in our marriage; and that problem was neither of us wanted to deal with it.

We had heard of this guy Dave Ramsey, and listened to his book Total Money Makeover on CDs when we were in our car together. We followed his baby steps to get smart financially. He gave us the kick in the butt that we needed. Here’s how we paid off $200,000 in 3 years time.

The first thing he suggested was to create an emergency fund of $1000. This was to cover any unexpected expenses that comes up when you are working the plan of paying off debt. We had to dip into that a couple times… flat tires, a root canal, and a random medical bill that we had somehow threw away. We still have an emergency fund and it does not get touched unless there’s a true emergency.

Next, we paid off our all of our DEBT!  We had over $200,000 of debt (5 credit cards, a car loan, multiple student loans, and an investment property) that we had accumulated in just a few years, and making the minimum monthly payments was just not cutting it. So Dave suggests that you list out all your debts from smallest to largest, and start paying off the smallest balance, regardless of interest rate.

Paying off those smaller debts was motivating for us to keep making the sacrifices needed to pay off our debt and as we paid off creditors, going to the mailbox became less of a traumatic experience!

Here are some of the ways we got creative and paid off our debt:

-We moved in with my mom for 2 years. Low rent and expenses helped us put the majority of our money towards that debt.

-We created a meal plan every week and didn’t go to restaurants. Thank God for mac n cheese!

-We got rid of our leased car and paid cash for a 20 year old car. Casey’s humbling… he’s a car guy!

-We said no to friends who invited us to the movies, out to dinner, and vacations. It was a sacrifice, and a bit lonely to be honest… but well worth it.

-If we didn’t absolutely need it, we didn’t buy it. Yes, it was a season where we felt lonely and even extreme but we knew we were doing the right thing for our marriage and money in the long run. We often reminded each other of the financial goals we both were working towards.

-Casey began officiating weddings to earn additional weekend income, which became some of the breeding grounds of Marriage365.

-I babysat for a few families to bring in some extra income while still wanting to be at home with our daughter.

Once we paid off our student loans, car debt, and credit cards, we had to deal with a very stupid decision that we made in the first year of our marriage – an out-of-state rental property. We were not qualified or financially secure enough to jump into something like this in the first place. We had renters, and they covered the payment, but if anything broke in that house, we were screwed. We made the tough decision to cut our losses and sell the house.

It took us 3 years, 4 months and 18 days to get out of debt – and it was hard work! Talk about a memory that we will never forget. When we got our final notice saying that we’ve paid our last debt and that our balance was zero, we danced all night around the house and screamed… WE’RE DEBT-FREE!

The best lesson we learned was not about money, but rather how to work together as a team to achieve something spectacular. We kept ourselves accountable to our goal.

Coming from the most financially illiterate couple, if we can do it, so can you. You may be feeling motivated, excited, nervous, anxious, or all of the above. Now is the best time to address any debt you have and don’t allow a job loss or an economic recession to be the thing that forces you to face your money head-on!

Want to learn more about financial freedom and getting out of debt. Check out this past Thriving Marriages article.

To learn more about about the Castons and their work with couples, visit Marriage365.com.

Share
Facebook
Twitter
Pinterest
WhatsApp
Previous article
Punishment Is Not An Acceptable Relational Tool
Next article
The Affair You Don’t Even Know You’re Having
Casey and Meygan Caston
For Casey and Meygan Caston, what started out as daily social media reminders about healthy marriage quickly led to writing, speaking, and coaching couples. The couple set out to create the first online premarital course called Happily Ever After, which gained national attention. The Castons nurture a thriving community of couples tuning into their monthly webcasts (and so much more!) at MyMarriage365, released a book series, and have sold 25,000+ copies in over 60 countries.
RELATED ARTICLES
Communication

4 Money Mistakes And How To Avoid Them

4 Tips For Fixing Financial Issues In Your Marriage

What Jesus Mentions Most About Marriage Will Surprise You