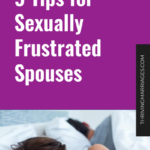 What do you do when you’re feeling sexually frustrated in your marriage?

A lot of advice about being sexually frustrated tends to be for singles, because sex is entirely off the table. But what about when you’re married, when sex IS an option, but your spouse just isn’t giving it to you? What do you do then?

Last week I wrote a post asking if the way that we talk about libido makes women have no libido–because we’re always focusing on how SHE has no libido. Someone challenged me on Facebook and said that most of my posts lately were about women with lower libidos, and I took a look, and she was right! I did a big series last year on higher drive wives, but I decided it was time to revisit it. And since I’m away on a speaking trip out west, I asked Rebecca to write this one (since writing is one thing she can do while recovering postpartum). So here’s Rebecca!

Sexual frustration happens in two situations in marriage: when sex can happen but your spouse just won’t, and when there is a period of time sex can’t happen but it is temporary. Let’s deal with the first scenario first: what do you do when you could have sex, but your spouse just isn’t interested? Let’s talk about it! (And we know that there are many sexually frustrated husbands who read the blog, so we’ll try to keep this gender neutral. But it really applies to higher drive wives, too!).

1. Deal with time wasters in the house

If you are frustrated that your spouse never wants to have sex, take a look at how much time is being put into video games, Netflix, TV or the like. Sometimes these time wasters can be a real libido-killer because they suck all your attention and then before you know it, it’s midnight and you just crash and go to sleep. It’s easy to get into this self-defeating routine.

Talk to your spouse about cutting out some time-wasters from your routine so you can focus on your marriage and relationship. Make a list of things you can do instead, like having dessert by candlelight or settling into a bubble bath together! Sex often becomes frequent when there are fewer barriers in the way.

If you’re feeling sexually frustrated, ask yourself what your expectations are for sex. Maybe you have a much less physically demanding job than your spouse, or maybe your spouse is exhausted from taking care of the kids all day and simply doesn’t have the energy to have sex as often as you would like. Your expectations for frequency may need to be tapered a bit if they are unrealistic for your spouse’s schedule.

You may want to have sex every night, but your husband may need a few nights off a week because of the demands of his job. If your spouse’s refusal some nights is more about their situation than it is an indication that they never want to have sex, it can be easier to re-adjust your expectations and avoid the disappointment.

3. Ask your spouse what would make more frequent sex easier for them

If you’re working outside the home and your spouse is taking care of the house and the kids, then taking over childcare in the evenings so they have a bit of time to themselves may give them the break they need to be able to get in the mood.

Or, if your spouse has a really physically demanding job it may help if you take more of the active role during sex, since sex may simply be a really daunting task most nights if he/she often does most of the “work” during sex and you tend to be more passive, despite being more physically energized.

4. Talk to a someone about being sexually frustrated in your marriage

If this isn’t just a frequency issue, but you’re in a marriage where sex seems to be entirely off the table, that needs to be addressed. A lack of sex is not normal in a healthy marriage, since sex is an important and unique part of the marriage relationship.

Bringing in people to talk about this isn’t about ganging up on your spouse to pressure them into having sex–it’s about recognizing that something important is missing and building a community of support as you deal with this together.

See a licensed counselor with your spouse, or bring in a couple you both trust to help you have those tough conversations. If you need to talk about it with someone to figure out how to go forward, find a same-sex friend you trust.

5. Talk about seeing a licensed counselor either individually or together

It may be that your spouse has been abused in the past and it’s causing him or her to have difficulties with sex now. Dealing with past sexual trauma is very difficult, and your spouse needs you to be understanding and patient with them as they go through recovery. But in order to get freedom from the abuse, they do need to go through recovery. That may mean talking to trauma therapists, seeing a licensed counselor, or going on medications to deal with other mental illnesses that were brought on by the abuse.

Abuse doesn’t need to dictate your spouse’s entire future. You can encourage him/her to seek out therapy to deal with the past trauma to be able to move on and experience everything God intended sex to be, as a blessing in your marriage.

Sexual disinterest isn’t always just about abuse, though. Sometimes there are other issues such as self-esteem or body-image issues or feelings of inadequacy. Maybe depression or anxiety are crushing your spouse’s libido. Either way, seeing a counselor can help get to the root cause of the issue and put a plan into place to work together towards a healthier future.

6. Ensure there are no major sexual sin issues

If your spouse doesn’t let you see their screens, hides their phone, or becomes defensive when you ask to use their devices, those can be red flags that they are watching, reading, or playing something they are ashamed of.

But what about when sex truly is off the table?

What about when a spouse is away for long stretches of time due to work, or when there are health issues that make sex genuinely impossible for a time?

7. Exercise to be less sexually frustrated

Libido is sexual energy. Take that energy and channel it somewhere else! Physical exercise can be helpful because it leaves you too tired for anything else, anyway. Plus, then when your period of waiting is over, you’ll be in great shape and may even be able to try some new things!

Puzzles, knitting, painting, whatever it is–find something that can engross you for hours and that you really enjoy doing! By finding something to fill up your evenings with, you can try to distract yourself a bit from the fact that sex isn’t an option right now.

As well, if you’re in a situation where you and your spouse aren’t long-distance but there are health or other issues that are causing the temporarily sexless marriage, finding a hobby you can do together or two hobbies you can do side-by-side is a great way to spend time together while you can’t connect sexually like you’re used to.

Watching a bunch of rom-coms or racy TV-shows isn’t the best idea when you’re in a sexless period in your marriage–you’re just making it more difficult for yourself. Likewise, staying away from romance novels can help you put sex to the back of your mind because you’re not constantly bringing it to the front.

And 10. (Bonus Tip) Find ways to increase your intimacy without sex

Even if you can’t have sex for a time due to health conditions, for example, you can still be intimate. Taking baths together, snuggling at night, curling up to watch a movie and sipping hot chocolate together. Not being able to have sex for a time doesn’t mean you need to say goodbye to all romance in your relationship.

Share
Facebook
Twitter
Pinterest
WhatsApp
Previous article
The Heart Is The Heart Of The Matter. How’s Yours?
Next article
What To Do With The “If Only” Regrets of Life
To Love, Honor, and Vacuumhttp://tolovehonorandvacuum.com
RELATED ARTICLES
Conflict