How to be a Cheerleader in Your Marriage 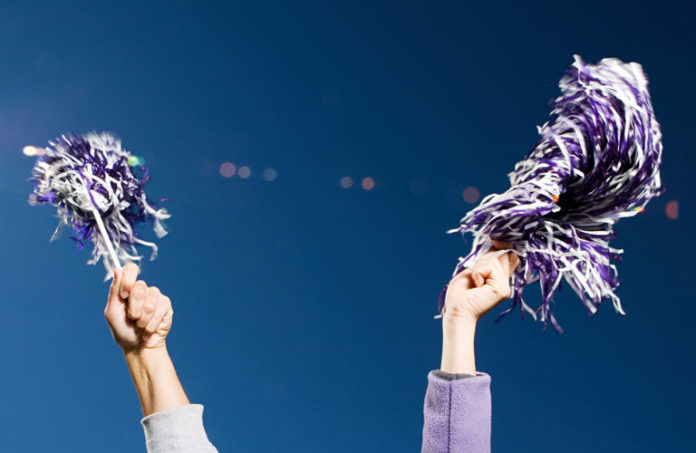 “See to it that you really do love each other intensely with all your hearts.” 1 Peter 1:22

In the early 1990s, William and Esther flew from California to Romania to pick up an infant girl they had adopted. But they got more than they bargained for. The couple was deeply moved by the plight of the abandoned babies crammed crib-to-crib in squalid, dimly lit rooms. Esther was especially touched. Before she and her husband flew home with little Tricia, Esther made a promise to God that she would not forget these forgotten children.

Shortly after they returned, Esther came to William with an idea. She wanted to start an adoption agency and begin finding homes for children like those they had seen in Romania. Not that this couple’s lives weren’t busy enough. Tricia was their fourth child, and William was the president of a growing company that demanded much of his time. But Esther’s heart had been captivated by so many little lives without hope, and she wanted to do something to help some of them. She asked if her husband would support her in this ministry.

William heartily agreed, realizing fully the time and effort Esther’s vision would require from her – and from him. Over a period of many months, the plan came together. Esther and her team of volunteers did much of the legwork. William helped when he could and pitched in at home to free more time for Esther. When things got tough – and they frequently did – William encouraged and supported his wife, sometimes as a sounding board or a shoulder to cry on. When Esther had to travel overseas, William accompanied her as often as his busy schedule allowed.

Finally the orphans began arriving for the new homes Esther’s agency had found for them. They came from Romania and several other countries. Along the way, Esther asked William if they could adopt another, then another, then another. It became a joke around their church that every trip overseas would result in another adoption.

To date, hundreds of orphans have been rescued and placed into loving homes by Esther’s agency, and the couple’s family has grown to nine children. Esther’s heart for children has translated into a lot of extra work for William, but he has done it gladly. William is Esther’s greatest admirer and most loyal supporter. Esther readily admits that she could never have followed God’s call on her heart without her husband’s loving, emotional, and practical support. “He is my constant cheerleader,” she says.

What would it mean to you to face each day knowing there is someone cheering you on a matter what happens? How would you feel knowing that someone is 100% committed to encouraging you, supporting you, and helping you reach your goals? What would it do for your heart to experience this kind of love and loyalty?

In a marriage, each spouse has the opportunity and privilege to be the other’s enthusiastic cheerleader and loyal supporter. When you are convinced that your spouse is always on your side, you can endure almost anything. Such loyalty, emotional support, and practical help keep the flames of renewing love burning brightly.

How can you become your spouse’s cheerleader? One excellent place to start is by applying the “one another” passages of the New Testament to your marriage relationship. Throughout the Gospels and epistles, Christians are instructed in specific, practical ways on how to love, encourage, and support one another. Since your spouse is the number one “other” in your life, here she should be the first recipient of your loving care. Here are several “one another” and “each other” passages and suggestions on what they could look like in your “cheerleading” at home.

“Don’t condemn each other” Romans 14:13. Don’t be a source of constant criticism and nagging in your relationship. It will wear your spouse down instead of cheer him or her on.

“Except each other just as Christ has accepted you” Romans 15:7. A good cheerleader is enthusiastic and supportive whether the team is winning or losing. Focus your encouragement on your spouse’s strengths and accomplishments while cutting plenty of slack for mistakes and imperfection. Be a constant source of genuine compliments, encouraging words, spoken appreciation, helpful advice, and cheery positivism.

“Be kind to each other, tenderhearted, forgiving one another” Ephesians 4:32. When your spouse wrongs you, don’t punish him or her with an icy stare, a blazing reprimand, punishment, or payback. Be quick to let it go, and be an instrument of restoring harmony.

“Serve one another in love” Galatians 5:13. Constantly look for ways to ease your spouse’s burdens in life by helping with chores and sharing responsibilities. Take delight in doing the dirty work without being asked or begged to do it.

“Submit to one another out of reverence for Christ” Ephesians 5:21. Don’t always insist on your way of doing things or treat your spouse as second class in any respect. Celebrate and defer to your spouse’s strengths. Treat him or her as an equal who is just as gifted and competent as you are in many areas.

“I command you to love each other in the same way that I love you” John 15:12. Whenever you are in doubt about how to encourage and support your spouse, turn to the master cheerleader: Jesus. Pattern your love after his sacrificial, constant, accepting love for you.

Become each other’s cheerleader, and watch your “team” soar to the top.

Pray Together
Kind and caring Father, you are the ultimate source of my encouragement and support. No one loves me as you do. No one is more understanding and forgiving. You cheer me on when others don’t even know my failures and fears. You lovingly supply my needs, often before I ask. I praise you for demonstrating so convincingly you that you are on my side. Help me keep my eyes on you to learn how to lend better support and provide stronger encouragement to my spouse. Keep the fire of love within me blazing and growing. Amen.

Renew Your Love
This week, express thanks to your spouse for being your cheerleader. Either in some face-to-face time or in a note or card, recount for him or her the many ways you feel encouraged and supported in your relationship. Be specific instead of general, citing examples. Then select one way you will become more of a cheerleader to your spouse, and start practicing it this week. Here are a few ideas based on the “one another” and “each other” passages above:

When you are tempted to nag or criticize, replace those words with positive comments.

When your spouse makes a mistake of some kind, don’t make an issue of it. Compliment him or her for effort, or focus on another strength.

Take on an unpleasant job for your spouse this week.

In some area of your life, ask your spouse, “What would you like to do?” and then submit to that request.