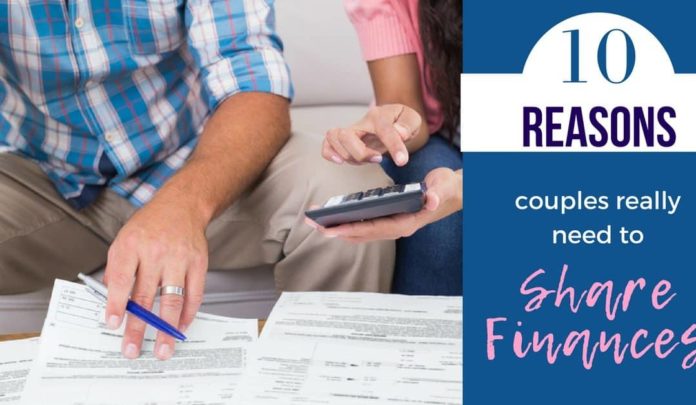 Money isn’t the sexiest marriage topic (that would be, ya know, sex), but considering how many marriages are destroyed by money troubles it’s important. Today’s post from the always-great Sheila @ To Love, Honor, and Vacuum is a great read and I hope you find time for it. Enjoy!

I asked on Facebook recently whether people kept joint back accounts or separate ones, and quite a few people said that they kept separate accounts.

They either divide expenses down the middle, or they delegate certain expenses to certain people. They may have a joint account for some things, but much of their money is separate.

And I think this is becoming more and more common, especially when both people work. Yesterday I was talking about how dangerous it was for one spouse to have no access to money, which most commonly occurs when one spouse is at home with the kids and one works. The one who works outside the home feels that the money is theirs to decide what to do with, since they earn it.

Wrong. And it’s just as wrong when both people make money outside the home.

I’ve been binge watching Dave Ramsey YouTube videos lately, and he says some great stuff about marriage. And when it came to sharing finances, he’s adamant.

“When you try to do a joint venture instead of a marriage, that’s when things get messed up.”

‘When you try to do a joint venture instead of a marriage, things get messed up. – @daveramsey’CLICK TO TWEET

Now, that doesn’t mean that you can’t have separate bank accounts for certain things. But you have to be able to make a financial plan TOGETHER when you each consider all the money to be family money, in my opinion.

So today, for Top 10 Tuesday, let’s look at 10 reasons why it’s important that the couple consider all money “theirs”, not “his” and “hers”–even if they do keep multiple accounts for different reasons.

The whole purpose of marriage is that you now are one…. Married couples are found to be more dissatisfied when they don’t pool their finances. And couples who pool at least 80% of their income are happier than couples who pool 70% or less. This stuff matters.

2. Sharing finances means you’ve jumped “all in” to the marriage

When people hold back their money, it’s almost as if they’re holding back part of themselves. It’s like we’re saying, “I need this money in case our marriage doesn’t work,” or “I’m holding on to this because I need to still have independence.”

If you’re worried the marriage won’t work, or if you still need independence, you shouldn’t have gotten married.

And studies have repeatedly shown that couples who fully commit then create love. The simple act of commitment often makes people act more lovingly, because they know they’re in this for life. So don’t hold back!

Marriage means total transparency. You shouldn’t be keeping things from each other, because that builds distance. If you don’t know about your spouse’s financial situation, that’s not good for your marriage, besides being dangerous if one of you is ever incapacitated or hurt and the other needs access quickly.

4. If you share finances, you don’t have to keep track of “his” and “hers” expenses

I know a couple who keeps completely separate finances. They even have “his” car and “her” car. But this can lead to needless stress over the smallest of things.

For instance, they got in a squabble once when his car was in the garage, but they had to take a four hour drive out of town because his family was having a reunion. So they took her car. But when it came to gas, who should pay? He said it was her car; she said it was hisfamily.

I listened, flabbergasted, because I can’t imagine ever having to negotiate this stuff, since everything Keith and I have ever had is “ours”. And thus we avoid these squabbles entirely.

When you share finances, you have something called a “household income”. You can then look at that number and decide together what your spending should be. If, on the other hand, you each keep separate finances and contribute a certain amount into a pool every month, or divide up the bills to be paid, then it’s much harder to keep a lid on spending and make some long term goals.

Incidentally, having a “household income” does not mean that you can’t allocate money for you to spend as you see fit. I’ll let my daughter chime in here on what they do: We live on next to nothing month-to-month–and a lot of that is because I’m starting an online business while putting Connor through school, and he won’t be certified for his profession for another 2-3 years! So from the beginning of our marriage we got used to sitting down at the beginning of every month, looking through our finances, and deciding how much money we realistically could spend. While we were both in school, we would each get a $50 bill out at the bank at the beginning of the month and use that and that alone for all spending money, eating out, clothes, and the like  for the month.Connor and I jumped right into the joint account life from the beginning for a ton of reasons–but a large one was the accountability when it comes to spending.

We didn’t have much wiggle room. Having separate bank accounts would have made it that much harder to see what we actually had to spend as well as how much we were spending. Having our money pooled together showed us the big-picture of what we were doing with our money, and alleviated the guilt of spending wisely! Since we had decided together how much we could afford, we were free to spend that money however we saw fit, so I didn’t need to feel terrible about getting a Starbucks once in a while. Connor actually saved up almost all of his spending money for a few months and bought himself a PS4, something we never could have afforded outright! It has really helped us be mindful of what we’re buying and how it’s impacting not only “my” money, but our lives. Because to us that’s what it’s about–money is merely a tool to build up our future together, so why not just do it together in the first place?

One day neither of you will be working. And retirement savings needs to be coordinated. How much do we need, together? For tax purposes, who should have the most in a 401K?

If you are each contributing for retirement separately, though, it’s much harder to coordinate these goals. And the one who is more of a saver could easily resent the one who is more of  a spender and isn’t contributing as much. When you have a household budget that includes a line for “retirement savings”, this is much easier to negotiate. Which is probably why couples who share finances tend to save more!

7. Sharing finances allows you to save for short-term goals

Let’s not just look at the long-term, though. What if you decide that it would be really nice to take the family on a cruise in two years. How do you budget for that? Do you each have to contribute equally? What if it’s more important to one than the other? Again, when you share finances and have a shared budget, these decisions are easier to make.

8. If you share finances, you get a heads up if someone’s in trouble

What if someone has a gambling problem, or a spending problem? What if someone is doing something they shouldn’t be doing and leading a double life? It’s much harder for these things to become issues if the finances are shared and open. And when being secretive isn’t that easy, it often takes away the temptation for many of these things which could all too easily become addictions. It’s just accountability–and it works!

9. Sharing finances means there’s not an automatic spirit of “doing your share”

When you’re splitting finances, there’s this underlying assumption that you each should “do your share”. That leads to a dynamic where the goal is “fairness”. Any time in a marriage where you’re trying to measure if someone is doing their share, there will be tension, because people tend to value their own efforts more. If she earns more money, does that mean that she only has to contribute the same amount he makes, and she can keep the rest? If he gets a raise, does he have to share it with her? If he’s working overtime, should she have to work overtime, too? If she goes back to work, does childcare have to completely come out of her income?

10. Sharing marriage finances leads to a family focus, not a self focus

I know a couple who, when they got married, assumed that they would each contribute a certain amount of money to the household each month.

But then she got pregnant. And somehow the expectation that she should keep contributing money didn’t go away. He didn’t suddenly start paying “her” bills (the ones they had allotted to her, like electricity) just because she had just delivered a baby. So when the baby was very young, she had Grandma baby-sit and went back to work. Meanwhile he was spending a lot of money on fishing trips, because he was still contributing “his share”.

Two are better than one,
because they have a good return for their labor:
10 If either of them falls down,
one can help the other up.
But pity anyone who falls
and has no one to help them up.

One of the benefits of marriage is that someone has our back! If one person goes through a period of unemployment, the other steps in and helps. If one is sick (or just delivered a baby!), the other one covers. In fact, “specialization” is one of the things that brings the most happiness and satisfaction to married couples vs. other kinds of couples. When you are totally committed and “all-in” to the relationship, then you can each start to do what you do best, rather than having to act the same way you did before you were married. So if one makes more money, they can work more while the other is home with the kids. And it works out better for everyone.

Want to start budgeting together and start sharing the family’s finances? Here are some resources that can help!

Share
Facebook
Twitter
Pinterest
WhatsApp
Previous article
These Are the Words Your Spouse Desperately Needs to Hear
Next article
Not Spending Time With Your Spouse Is Okay
Joshua Peasehttps://tinyletter.com/joshuapease
Josh is a writer, pastor, and journalist passionate about discovering a more compelling vision of God's kingdom. You can read more of his work at joshuapease.co
RELATED ARTICLES
Communication